A master thesis by Julia Goss has been published during July 2014 (Neonicotionoids and honey bee health, SLU, Uppsala, 53pp). The studies aim to show light on the appearance of varroa-mites, Nosema and virus in bee societies having foraged on spring rape with and without treatment with clothianidin, one of the strongest neonicotinoids.

The investigations are based on sampling of bees before and after flowering of the spring rape. This meant June 6-7, and after flowering July 25 or August 5. At the sampling bees from the outer comb close to the entrance of the beehive were collected. This means mostly older bees, particularly flight bees. 100 bees were sampled for analyses at each occasion from each of the 96 societies. It should be added that the bee societies were kept on only one box with 10 combs (Langstroth) during the whole experimental period.

Criticism 1. For analysing varroa mites from a bee society the recommendation is that for a good precision one should sample 300 bees, preferably three times, meaning in total 900 bees and from different parts of the hive. Otherwise the uncertainty will be too big (Lee et al 2010). If sampling only 300 bees one should sample bees from a brood comb with larvae and pupas, and definitely not from a comb with old bees, as it is well known that mites are preferably found on young bees. Definitely should not only 100 bees be collected, especially as in the end they were often only 90. This means it is impossible to draw any firm conclusion about the appearance of mites on the differently treated canola fields. A hypothesis worth testing would have been “mites are decreasing in bee hives exposed to canola fields treated with neonicotinoids”. It could in fact be possible that varroa mites react more negatively due to these poisons than bees grown up on this poison. This possibility is totally missed by not taking samples on bees correctly.

Criticism 2.  Sampling was taken only of old bees on an outer comb. This means that bees fed and grown up on pollen and nectar containing neonicotinoids almost certainly are avoided. These are probably only once on the entrance, because when they have left the hive they will probably never find the way back to it again. This is one of the known sub-lethal effects of neonicotinoids, that bees loose their smell and localisation senses (Blacquière et al. 2012, Henry et al 2012). Thus sampling has been done on wrong bees to show neonicotinoid effects. Old flight bees, having eaten too much of poisonous nectar, might also already abandoned the hive.

Criticism 3. The sampling date representing bees after exposure should be specifically thought of. During 2013 spring rape flowered in southern Sweden from the third week of June to the first and second week of July. Eggs laid during this time are larvae after three days and are fed up as larvae during six days. Then they are pupas for another 12 days and born as bees in total three weeks after egg laying. Then we are in the three last weeks of July, and for many bees not until August. These young bees, fed and grown up on poisonous pollen and nectar, will, however, not immediately become flight bees, but are using their first two-three weeks as nurse, cleaning and building bees on the brood combs. One can expect them as flight bees earliest in August. This is something every beekeeper is aware of.

Criticism 4. According to information from the responsible field assistant (Tomas Carling) all bee societies were continuously kept on only one bee box with Langstroth-combs during the whole summer.  The experiment started with relatively small bee societies of equal size, so this was a statement. However, the very nice summer weather caused the bee societies to breed very fast, and swarming appeared in a great number of the boxes. I don´t know in how many, but according to Tomas Carling it was a great deal of the boxes. A swarm leaving the hive means that maybe 50% of the bees disappear during the experimental period. Then especially a great number of superfluous young bees disappear with the queen, and then also a big amount of poisonous bees and bees with mites. In addition, some new eggs, larvae and pupas for varroa mites to breed on will not be available until after a month, when the new queen started her work. At that time spring canola has stopped flowering and the bee societies have been moved back to the original bee owner.

These circumstances are reasons enough not to include swarmed societies at all in the studies, if one want to illuminate the potential effects of neonicotinoids on pathogens on honeybees. Swarming might be seen, except as a natural breeding strategy for honey-bees, also a way for the bee society to escape from diseases in the hive or eventually as a way to avoid poisonous food. In this way the honey bee society can be regarded as a relatively stabile community, resistant towards disturbances. But if you want to check the effects on pathogens due to agricultural pesticides, then swarming from a full box is not to be regarded as a significant reaction on poisons. In this case it is totally up to the beekeepers responsibility.

It´s a bit curious that Goss (2014) does not mention anything about swarming, which indicates that she has not been informed about these at all.

In summary my conclusion of this criticism is that the investigation unfortunately is of no value for understanding clothianidins eventual impact on pathogens like varroa mites, Nosema and virus. It is not possible to conclude, as is done in the paper, that clothianidin has no effect on these pathogens, because the bees that could be expected to show some effects have not been sampled.

Professer Ingemar Fries, Swedish Agricultural University in Uppsala, has given a detailed reply, but not so much explaining why not sampling was done on the right bees. His reply was during a short time to be found under Biodlingsföretagarna, Nyheter. Below I give my comments to his explanations.

Unfortunately my criticism is confirmed. The circumstances around the layout of the project, as explained by Ingemar Fries, do not support that sampling has been done correctly.

Criticism 1, sampling concerning varroa mites was made on too few bees on wrong combs and at wrong time. Ingemar Fries says that the purpose has not been to state the number of mites, but to study varroa on a smaller number of bees to see if they had been more or less affected by virus. To me this seems to be a secondary fabrication, as Ingemar Fries usually put forward that it is above all the varroa mites and not neonicotinoids causing the death of bee societies. If he believes so, then it would have been really important to make an adequate sampling of these mites.

It is very curious that in such a big and costly project as the present, they did no use the opportunity to find the reaction of mites and if clothianidin has any effects on them and coexisting virus and Nosema. It must be seen as a scientific mistake.

This is how Julia Goss claims in her thesis: ” The infestation with V. destructor was relatively low and the exposure to clothianidin had no significant impact on the V. destructor prevalence and infestation rate of the colonies.”

Obviously this is how she conceived the project, and she account for the experiment in a way that it was totally clear for her that she studied the impact of clothianidin on the mites, as well as on Nosema and virus. But then the sampling cannot be approved concerning varroa mites, and accordingly not for the appearance of Nosema and virus.

Criticism 2, bees having been toxified by clothianidin will disappear. Ingemar Fries means this is not proved in field trials. No, obviously not so much, and maybe I overblow the effects of clothianidin, but I wish that in this project they had marked bees bred on toxic pollen and nectar in order to find out what happens with them.  That´s what is done in smaller experiments. We are many experienced beekeepers having observed the effects of spring rape in the neighbourhood, and when our bees are lost during late summer/ autumn it seems quite obvious what has happened. What is missing are clear evidences and analyses, but then you need to have not only money, but also the knowledge of how to study it. That´s what I was hoping to see from this project, but obviously I was fooled.

Criticism 3, bees bred on toxic pollen and nectar have not been sampled. Ingemar Fries cannot explain why they avoided to sample field bees that were exposed to clothianidin during their grown up time and have become tracking field bees. I am not insinuating, but just state that either the correct sampling was consciously avoided, or the directors of the project were so uneducated concerning honeybees development that they missed to take samples from bees being exposed for clothianidin during their whole life time. The last alternative seems less likely with professor Fries experience and competence.

Bees eat pollen to build up their bodies, and they do it efficiently and quickly during 6 days as larvae. It is in this stage one can expect that the very strong nerve toxin clothianidin will have an impact, when the nerve system and brain is formed, and it is very close to assume that then the bees are also affected concerning their immunity towards pathogens. Of course these bees should have been the primary goal for studies on pathogens, but they have not been sampled (cf Figure 1)!

From one report (Delrapport 2013, Rundlöf et al 2013) of the project it is very clear that the highest concentrations of clothianidin are found in pollen. If bees grown up on this pollen had been sampled and analysed, they would probably shown the highest values! It would have been wise to follow the effects on pathogens on such bees.

Criticism 4, swarming bee societies should not been included in the studies of pathogens. Ingemar Fries says that the swarming societies are equally distributed between the two different experimental groups, and then there is no reason for criticism. Well, it is good if there was an even distribution of the bee societies, but nevertheless they should have been reported separately, as at the latest sampling date these bee societies probably had no brood at all, thus less breeding of mites and probably also lower amounts of other pathogens.

Shortly, all my criticism remain, and it is not possible to claim, like Ingemar Fries and Julia Goos, with a clean conscience, that no effects on the pathogens of honey bee societies exist in this field trial. Because wrong bees have been sampled. Their statement might mislead the whole world, except beekeepers with a knowledge, and it might affect EUs decision concerning prolonged banning of the use of these toxins. This is very serious accusation, and being Sweden´s only professor in apiculture Fries should know better. The investigations of Goss are certainly very good, but they have been done on too few and wrong bees.

Professor Ingemar Fries replied on this that he did not wish to continue the discussion. 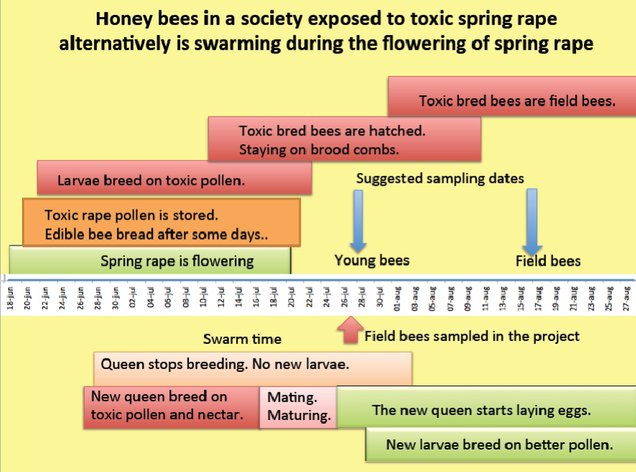